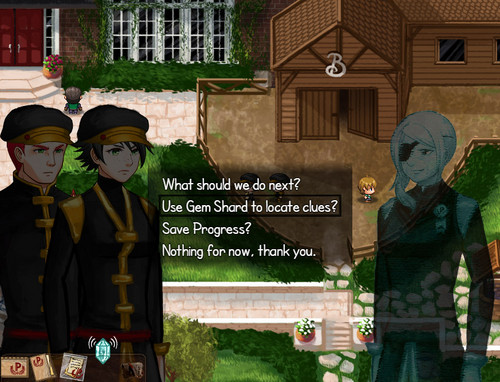 I'm very excited to announce a new feature for The Roze Case! Early feedback I received mentioned it was difficult to find some well hidden clues in areas, so there is now a way to use the Gem Shard to locate nearby clues! Simply access the GemShard as you would normally by clicking on it. Choose the new option to "Use Gem Shard to locate clues" and important undiscovered clues will now sparkle. (see screenshot attached)

There were other additions to this patch, like new custom effect animations, and a new save command prompted at the end of the game to see credits again or help time speed runs, a few performance updates, bug fixes including rescuing escaped horses and broken stable lofts!

That's all for this update, if there are any other bugs or feature requests please don't hesitate to comment, and as always I'd love to hear back from those Detectives who managed to solve The Roze Case!

Until next time,
"May Justice Never Be Undone!"

Get The Roze Case